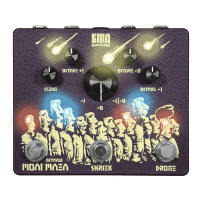 KMA Audio Machines’ Moai Maea is  answer to long forgotten analog octaver sounds to generate a huge wall of sound by playing just one note. It generates one higher octave and up to two sub-octaves. The higher octave has an edgy and fuzzy character which is reminis- cent of old seventy octave up. KMA added a sub-octave mode switch for more versatility. Choose between either the first (-I), the second (-II) or both together (-I/-II), which gives you the sought-after wall of sound.

The Moai gives you the possibility to create an individual mix of each generated octave and the original signal. To expand your soundscapes KMA added a serial bufferd FX-Loop at the clean path with a phase inverter to avoid phase cancelation when it comes to signal mixing. Each octave section is footswitchable. You can turn on and off the higher octave by jumping on the SHRIEK switch and the sub-octave by the DRONE switch.