The LITTLE LEHLE III allows you to remove effects pedals from your signal path at the press of a button.
A signal can be picked off at any point in the signal chain, for example allowing you to switch to an instrument tuner. The LITTLE LEHLE III can also be used to switch between two instruments with one amp or, vice versa, between two amps with one instrument. Extremely diverse sound sources are no problem. Signals from pickups, microphones and keyboard line-out sockets are routed loss-free to a target amplifier or recorder. All jack sockets are stereo, so you can re-route balanced signals too.
With the release of the LITTLE LEHLE III you can now combine mono and stereo signals. This will allow you to integrate an effects pedal with a mono input and stereo output into the signal path of the LITTLE LEHLE III without limitations. The LEHLE-Switch works with a microcontroller and an intelligent true bypass relay circuit with an active pop suppression function, thereby allowing the LITTLE LEHLE III to switch even faster than mechanical switches, noise free and without wear.
The easy-action mushroom-shaped button characteristic of LEHLE products is mounted in the cover so that your foot pressure is transmitted indirectly via a spring. Thus the circuit board is not exposed to mechanical loads, making the LITTLE LEHLE III virtually indestructible and guaranteeing years of trouble-free switching.
Not only is the stereo signal switched, but also the earth, – so say ‘goodbye’ to hum when switching between two amps, and selecting effect loops – it just can’t happen anymore.
New for the LITTLE LEHLE III are the three operating modes, making the switch work as either a latching or momentary switch, allowing for short or rhythmic stutter-effects. The third mode combines a mixture of operating mode one and two: a short hit engages the latching function and a long hit is momentary.
Think of the creative potential. We take care of your signal so that you can take care of the music. 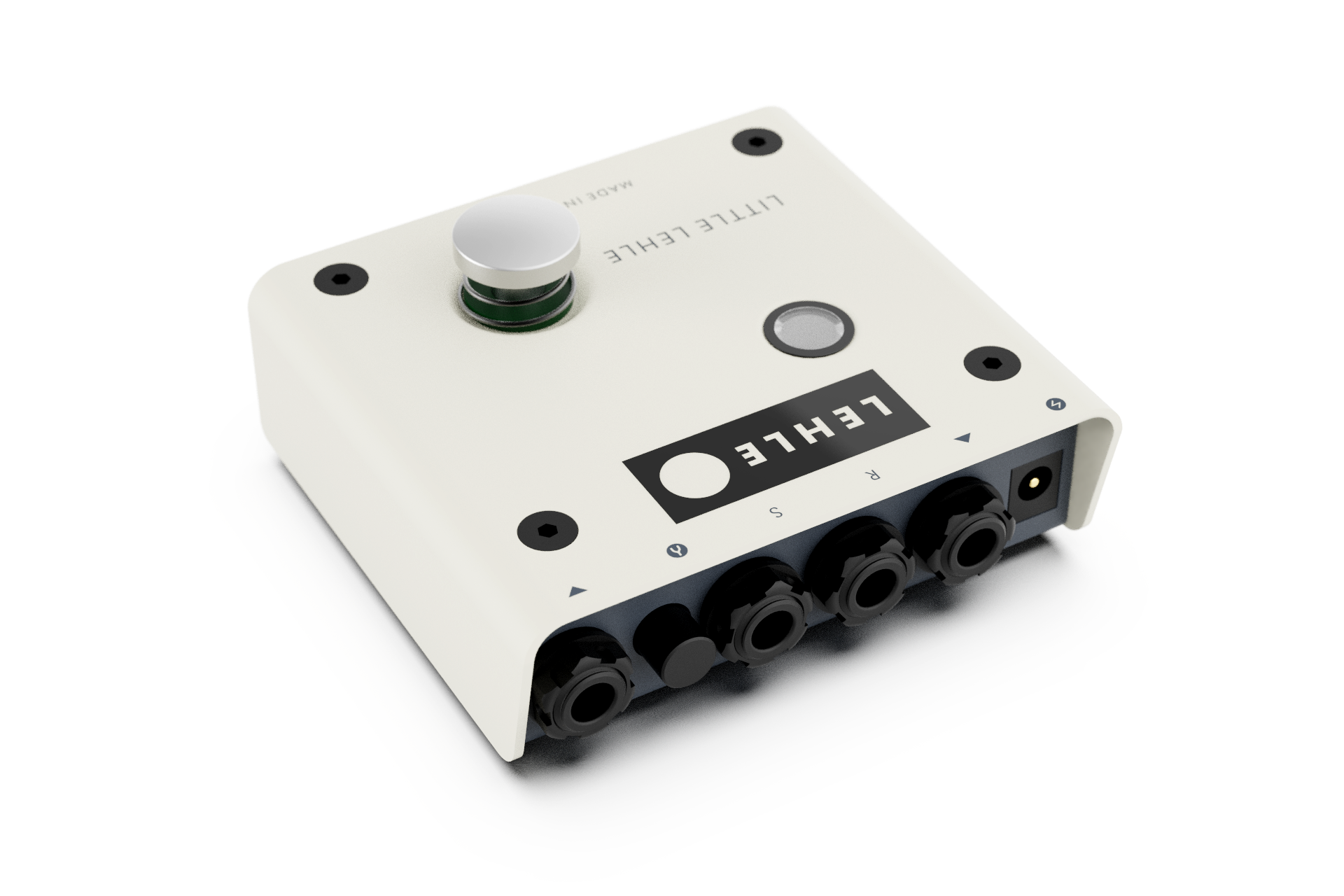 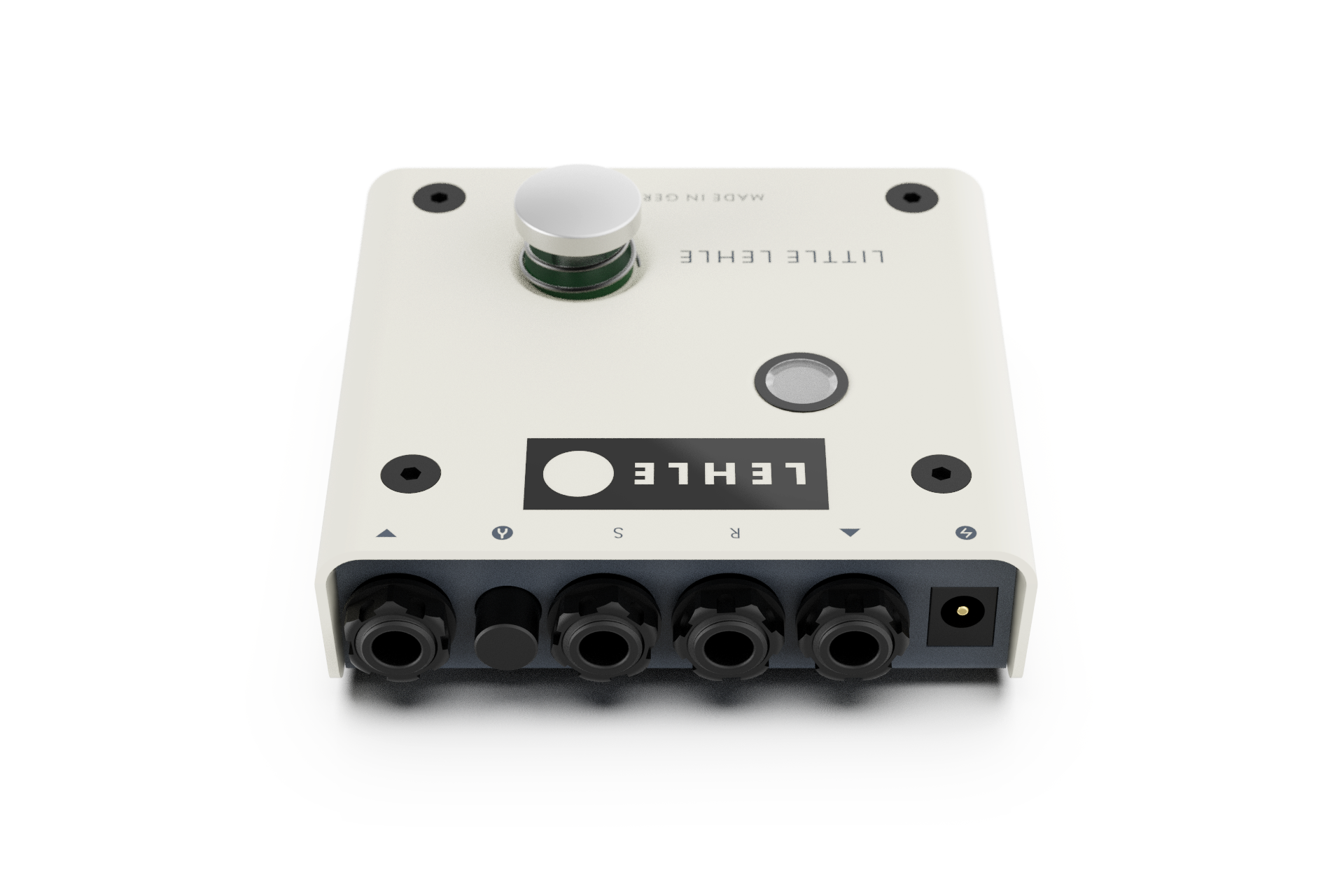 Inputs
Connect your instrument to this socket. The input signal enters via this socket. Like all the jack plugs on the LITTLE LEHLE III, the socket is of stereo type. The LITTLE LEHLE III thus switches stereo signals (such as stereo effects or key- boards) and balanced signals (like those from microphones, for instance) and, of course, simple mono signals, like that of an electric guitar. The LED shows white when the signal is present on the output together with the ground (earth) connection. Press the True-Bypass switch and the stereo signal and ground connection are routed to the S socket. The LED will now show blue. Switching of the ground connections eliminates the possibility of hum loops.
MONO-TO-STEREO SWITCH
MONO-TO-STEREO SWITCH Activates at the input socket the mono-to- stereo function. If this switch is not pressed, the LITTLE LEHLE III works with either mono or stereo signals. This means, all sockets should be occupied with either mono jacks (TS) or stereo jacks (TRS). By doing this you can place a mono or stereo effects pedal in the loop of the LITTLE LEHLE III. Some effects offer a stereo output, but a mono input. If the mono-to-stereo switch is pressed, the input and send can be occupied with mono jacks (TS), while the return and output transfer a stereo signal via stereo jacks (TRS). If the LITTLE LEHLE III is activated the in- put signal will be sent in mono to the ef- fects pedal. The output of the effect can be returned in stereo to the return and sent out to the output in stereo. If the LITTLE LEHLE III is deactivated the mono signal will be split straight after the input and sent loss-free to the output.
SEND SOCKET
SEND SOCKET S Connect the input of your effects unit or amplifier to this socket. Depending on the application, this socket is either connected to the input of one or more effects units, to a second amplifier or, for example, to a tuner.
RETURN SOCKET
RETURN SOCKET R Connect the output of your effects unit or a second instrument to this socket. This socket can be used for connection to the output of an effects unit, to the last output of a complete effects chain or, for example, can also be used for a second instrument. It has no function if the LITTLE LEHLE III is used as an A/B box for opera- tion with two amplifiers.
OUTPUT SOCKET
OUTPUT SOCKET Connect your amplifier to this socket. The output signal is routed out of the LIT- TLE LEHLE III via this socket. The LED shows white when the input signal togeth- er with the ground connection is directly present here. Pressing the foot switch routes the R(eturn) socket signal to- gether with the ground connection to the output socket.

LEDs for switching status
LED FOR SWITCHING STATUS If the LED shows white, the input is di- rectly connected to the output. The high-intensity LED clearly indicates the current switching status - even under bright spotlights. When you use the LITTLE LEHLE III as an effects loop switcher and the LED shows white, the effects are in Bypass, when blue they are in the signal path. If you use it as A/B switch between two amplifiers it means the LED is white for the amplifier at the output (5) and blue for the amplifier at the send. Same applies for switching between two instruments: LED white means that the in- strument at the input is active, blue ap- plies for the instrument at the return.

BASE AND FIXING
If required, mount the LITTLE LEHLE III to a pedalboard using the mounting kit. The LITTLE LEHLE III can be mounted to a plate such as a pedalboard using the two holes in the bottom of the pedal. You can find the optional LEHLE Mount- ing Kit V3 (order number 100981) online at www.lehle-components.com. To mount, undo the four housing screws by using a 2.5 mm Allen Key and detach the cover. Then fix the device base to a base plate using the two screws, the washers and the spacers of the Mounting Kit. Attach the cover and tighten the four housing screws - done! For flexible solutions we recommend us- ing 3M Dual LockTM instead of Velcro for stability, which you can also find in handy sizes at www.lehle-components.com
TRUE-BYPASS SWITCH
Here you can switch. The LITTLE LEHLE III switches all audio signals controlled by a microcontroller and an intelligent True-Bypass-Relay- Circuit with an active pop suppression function. Triggered by the easy-action mushroom- shaped button characteristic of LEHLE products mounted in the cover so that your foot pressure is transmitted indirectly via a spring. Thus the circuit board is not exposed to mechanical loads, making the LITTLE LEHLE III virtually indestructible and guaranteeing years of trouble-free switching.

External power supply
Connect a power supply with a voltage of 9 – 15 V. In order that the LITTLE LEHLE III can work flawlessly, it needs a current sup- ply. This should supply a minimum of 9 V and a maximum of 15 V. Polarity is of no importance. The supply voltage is in- ternally rectified and stabilized in order to guarantee trouble-free operation. In or- der to avoid noise it‘s recommendable to use a single power supply or an output of a multi power supply offering galvanically isolated outputs for the LITTLE LEHLE III.